Calipers with parking brake adjuster need to be a bit more complicated than adjusters for drum brakes because the deflection of the casting under load is more than the running clearance. This means that a simple adjuster would over-adjust after a high pressure stop and cause the brake to drag.
The fix for this problem is to prevent the adjuster from working when the line pressure has risen above a few bars.
Every caliper supplier has their own method of doing this, many of them patented but the outcome is very similar. This is a description of one such adjuster designed by Nissin but also used by Lucas. 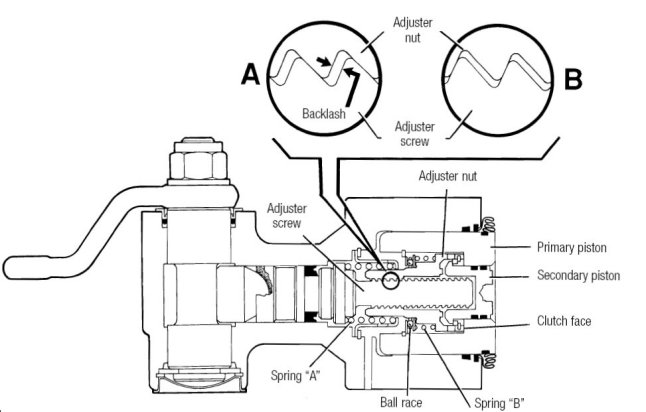 Within the primary piston the adjuster nut is retained by spring "B", a ball race, a washer and a circlip. Also within the piston is a secondary piston which, when the hydraulic pressure is applied, is capable of exerting an end load on the adjuster nut holding it against the clutch face. The adjuster screw sits in the base of the housing and is prevented from turning by its head profile (not shown) which locates in a mating form in the housing. The spring retainer, held by a circlip, causes spring "A" to exert an effort onto the flange of the adjuster screw holding it against the cam and strut. Square hydraulic seals are fitted in the cylinder bore and on the secondary piston and a lip seal is fitted to the strut.

If no adjustment is required each hydraulic brake application causes the piston and nut assembly to move forward until the adjuster thread backlash is taken up, typically 0.6mm. By which time the brake pressure will have reached 10 to 15 bar and the secondary piston will be holding the adjuster nut against the clutch face with such a force that rotation is not possible. A brake pressure above this requires the piston assembly to move still further to allow for deflections of the caliper housing and pad compression etc. Spring A must be overcome to achieve this and the adjuster screw moves forward as one with the piston assembly and no adjustment takes place. (The adjuster screw cannot rotate due to the shape of its head and the adjuster nut is locked against the clutch face by the pressure imbalance on the secondary piston).
During a high pressure stop the primary piston could move forwards by about 2mm, clearly, if adjustment were to take place the brake would become locked on.

When the parking brake is applied the adjuster is loaded on a 45 degree thread flank angle and much less torque is generated, this combined with the clutch friction prevents rotation and the locked assembly pushes the primary piston forward applying the brake.