Most modern multi-plate disc brakes run in oil to transfer the heat away from the friction plates but that hasn’t always been the case. The enclosed nature of the brake does require consideration of heat dissipation though. We will only discuss wet brakes here.
There are two fundamental types of multi-plate brakes, servo and non servo. This page follows the non servo brakes, servo brakes can be found here:-

The purpose of a multi plate disc brake is the same as the more conventional caliper. It has to retard, stop and hold the vehicle. The fundamental difference is that it is self contained and cooled by oil.

In principle it’s not too different to a motorcycle clutch but of course the details are very different.
The braking faces are between a number of interleaved friction discs and counter plates alternately keyed to the housing or splined to a driveshaft. The plates are clamped together to produce a braking torque either by an annular piston which is coaxial with the driveshaft or by a ball and ramp mechanism.


Many vehicles using this type of brake have hub reduction gearing so it is common for oil immersed brakes to be inboard of this gearing and as such they run at five or six time wheel speed.

Annular piston brakes have the benefit of simplicity of construction.
As the piston only moves in an axial direction to load the brake plates there is no inbuilt servo effect and the brake factor is one. A low brake factor means that the brake torque between left and right brakes will be more equal (since differences are not amplified) and the brake system will be more controllable, for a similar actuation.
On the downside, to get a given torque output a bigger piston will be required and this together with the long rubber seals (one metre or more) consumes a greater fluid volume. In order to minimise pedal travel, in none power brake applications, annular piston brakes run with low clearances and often have a method of controlling the amount of piston retraction.
Generally this type of brake is manufactured ‘in house’ with only the plates being bought from a specialist brake supplier. 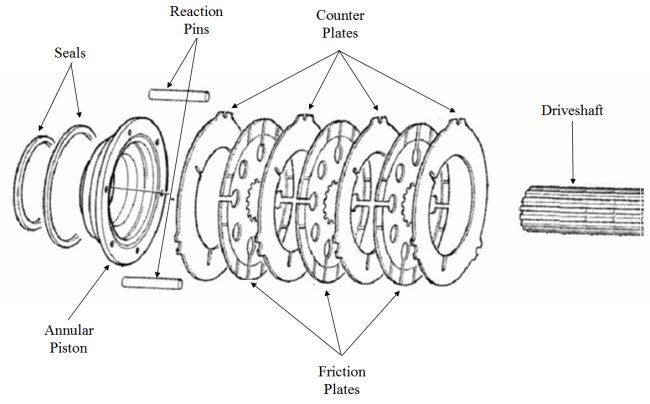 Ball ramp brakes have a mechanism inside the axle however if they are hydraulically applied the actuation is usually accessible from outside which helps to reduce servicing costs. In order to make a ball ramp actuator non servo the actuator must be decoupled from the friction plates. This is best done by using a needle roller bearing but Yamaha use a low friction plain bearing on this ATV brake as an acceptable trade off between performance and simplicity. 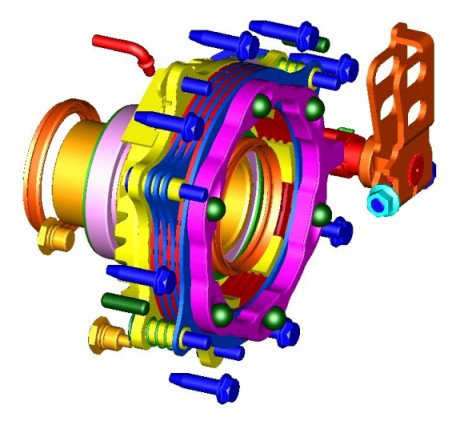 The main difference between a brake and a clutch is that a brake runs open and a clutch closed. In a brake the clearance between the plates causes parasitic losses by churning the oil and can consume large amounts of power, (the same applies to a lesser extent on ventilated dry discs where air pumping losses can be considerable – The French TGV train runs on solid discs for this reason).
Power losses reduce as the clearance increases up to about 0.15mm per face but at this level the fluid volume required to apply the brake would make actuation difficult.

Running clearances are usually compromises between minimising power losses and reasonable pedal travels when controlled by a master cylinder. Power loss curves shows little benefit can be gained from increasing the clearance above 0.15mm per friction face.
Annular piston brakes often use a controlled back-off mechanism to ensure the running clearance is maintained as plate wear takes place. This usually consists of a spring and a friction device. 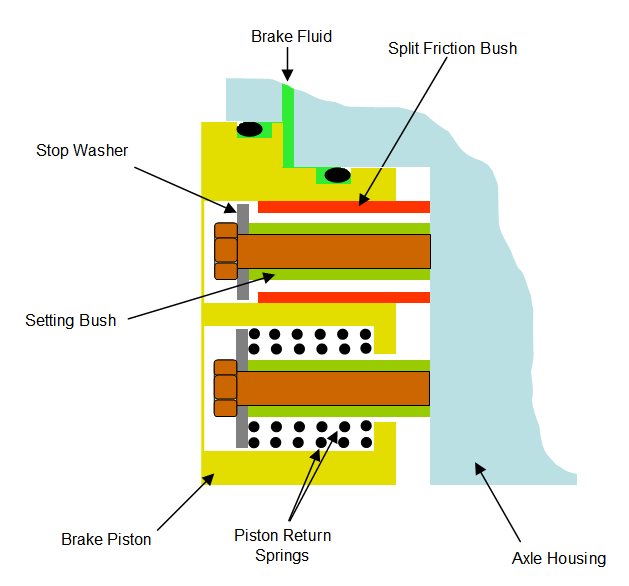 This type of adjuster is not load insensitive and could over-adjust if a high pressure stop allowed the piston to move beyond its normal position however given the brake is a full circle and the friction material is very thin the brake is so stiff as to not require a more complex adjuster.

There are four basic types of friction material available each with there own pro’s and cons, sintered, paper, graphitic, carbon. 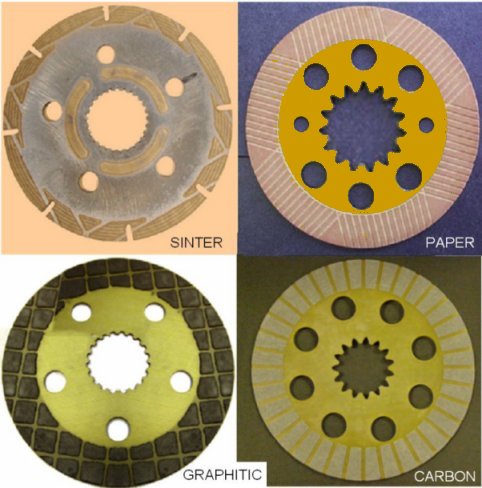 Grooves are either machined or moulded into the friction material to aid oil flow and thus cooling. Numerous patterns exist and each friction plate manufacturer has his favourite however the following points should be born in mind:-
The oil must be part of the cooling process. If large amounts of oil are present then the oil can flow quickly through the plates however if supply is limited then the flow through the plates should be restricted. Oil trapped between plates increases the parasitic drag losses and causes oil heating during brakes off running.
Spiral - This grooving pattern may be used where there is limited oil available due to the design of the brake.  The spiral pattern gives controlled oil flow through the grooves but will give high viscous drag.
Radial - or sunburst pattern is suitable for applications in which sufficient oil is available.  It facilitates high oil flow and quickly disperses heat whilst minimizing viscous drag.
Waffle - or multiple pass patterns are compromises between spiral and radial and offer some oil flow restriction without increasing drag too much.