An air disc brake isn’t at all like an hydraulic disc brake and its name is very misleading. It’s actually a mechanical disc brake and is only slightly more complex than the cable operated disc brakes fitted to early Japanese motorcycles.The air actuator is nothing more than a big rubber diaphragm and a push rod. 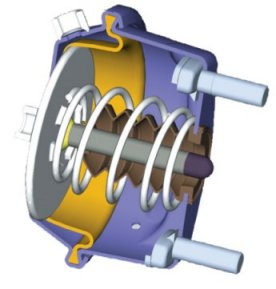 The air at up to about 100psi pushes on the rubber which via the spreader plate pushes the actuator rod connected to a mechanical lever on the brake. Some of the third generation calipers have the actuator directly mounted to the housing but the principle of operation is the same.

Disc brakes on heavy truck were slow to develop being launched in 1981 in the USA but not really finding customers until Renault took the Lucas D2 on the R420 in 1988. The D2 was a compromise allowing a quick change back to a drum brake if it all went wrong. The D3 caliper first taken by Mercedes Benz was optimised with the axle and had a bigger pad and clamp load capability. Since this time other designs have emerged that have two tappets to try and minimise taper pad wear.
Being a mechanical caliper the tappet(s) must be adjusted to allow for pad wear.  With clamp loads in excess of 150kN it’s obvious that the caliper will deflect as the brake is applied, this could be up to 3mm. Using a standard running clearance of 0.6mm the brake would overadjust if a simple ratchet adjuster was used so like the hydraulic parking brake calipers the adjuster needs to be a load insensitive.

This requires a three phase adjuster;

Phase one is when the adjuster moves through the backlash to create the running clearance, in the case of D3, below it’s a clearance between the clutch plate tangs and the drive ring but it’s often a sloppy thread.

Phase two is the adjusting phase and this takes place until a moderate clamp load has been generated, the point where all the slop has been taken out but before significant elastic deformation takes place.

Phase three is the high load phase where the adjuster is disabled by some sort of clutch or spring balance system to prevent over adjustment. 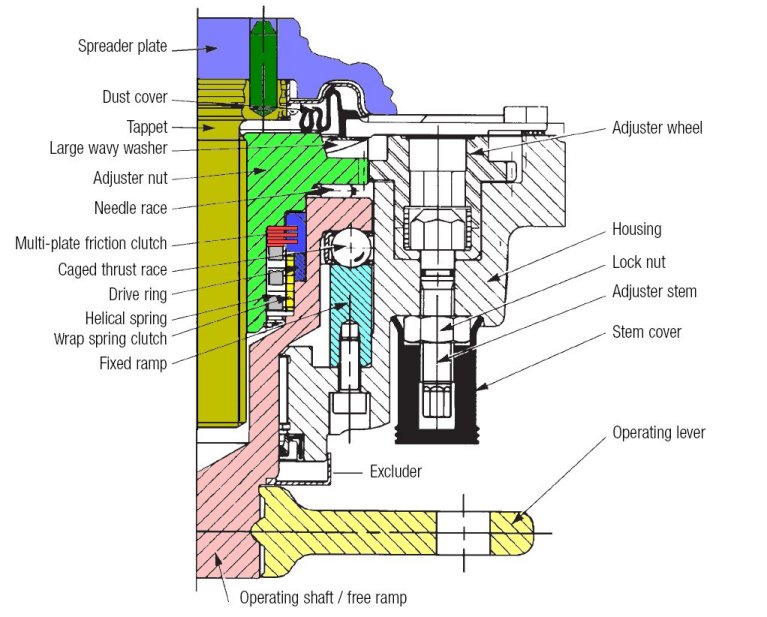 The actuating system consists of a lever and helical ball ramps, one fixed within the caliper body and one integral with the operating shaft. When the footbrake is applied the air chamber applies a load to the operating lever thus rotating the operating shaft and free ramp. As the free ramp moves up the helix of the fixed ramp the length of the actuator is increased. This movement is transmitted through a needle race onto the internally threaded adjuster nut, which in turn passes the clamp load to the externally threaded tappet. The tappet applies the load to the spreader plate which distributes the clamp load evenly across the pad backing plate. The tappet pin locating in the spreader plate prevents the tappet rotating. As the operating shaft rotates the wrap spring clutch locks (inside the operating shaft and drive ring) and acts as a solid link. The three components then rotate as one. This rotation takes up the free movement between the drive ring and the tangs on the outer plates of the multi plate friction clutch. The free movement represents the pad-to-disc clearance in the brakes off condition. The multi plate friction clutch, loaded by its helical spring, tries to transmit the torque from the drive ring to the adjuster nut. Due to the fact that the pads are contacting the disc and no adjustment is required any further rotation of the drive ring and operating shaft results in an increased clamp load on the disc (the load passing through the tappet head and adjuster nut causes their threads to lock). This causes the multi plate friction clutch to slip and therefore the adjuster does not operate.

The actuator operates in the same manner as described above and the drive ring takes up the free play between itself and the tangs on the outer clutch plates . The pads do not contact the disc so no load (which will make the multi plate friction clutch slip) is generated. As a result the inner clutch plates turn with the outer plates, thereby rotating the adjuster nut and extending the length of the tappet to reduce the lining to disc clearance. Once the pads contact the disc any further rotation of the operating shaft causes an increase in thread friction between the tappet and the adjuster nut. The increasing load causes the multi plate friction clutch to slip and the adjuster stops operating and prevents over-adjustment. Further movement of the actuator increases the load on the disc. When the brakes are released, the actuator mechanism reduces in length removing the pressure on the pads. At the same time the initial drag from the wrap spring clutch will return the drive ring to its original position, giving the designed lining-to-disc clearance. After this, the wrap spring clutch no longer acts as a solid link and so leaves the tappet in its newly adjusted position.